After years of wanting to visit this island I finally had my first opportunity to explore one of the largest and most untouched of the Greek islands. However, October is not the best time to search for reptiles and amphibians, especially if the Autumn rains have not yet arrived, which in my case, they had not. In fact shortly after landing I was surprised at how dry and barren the island really was, with temperatures still around 28C. I stayed at the resort of Skala Kallonis, an area popular with bird watchers owing to the abundance of wetlands, most of which were dry during my visit, including the larger river systems. I spent most of the week exploring this area and its surroundings by mountain bike, one of my favorite areas was the dry Potamia valley, west of Skala Kallonis which is where I found most of the reptiles I saw on the trip. Even though I was not too successful this time around due to bad timing, I thank the following people for sharing information regarding herps on Lesvos: Ronald Laan, Jelger Herder, Paul Cools, Arjan van der Lugt, Benny Trapp, Wim de Wild, Andrew Merrick and André Van Hecke. 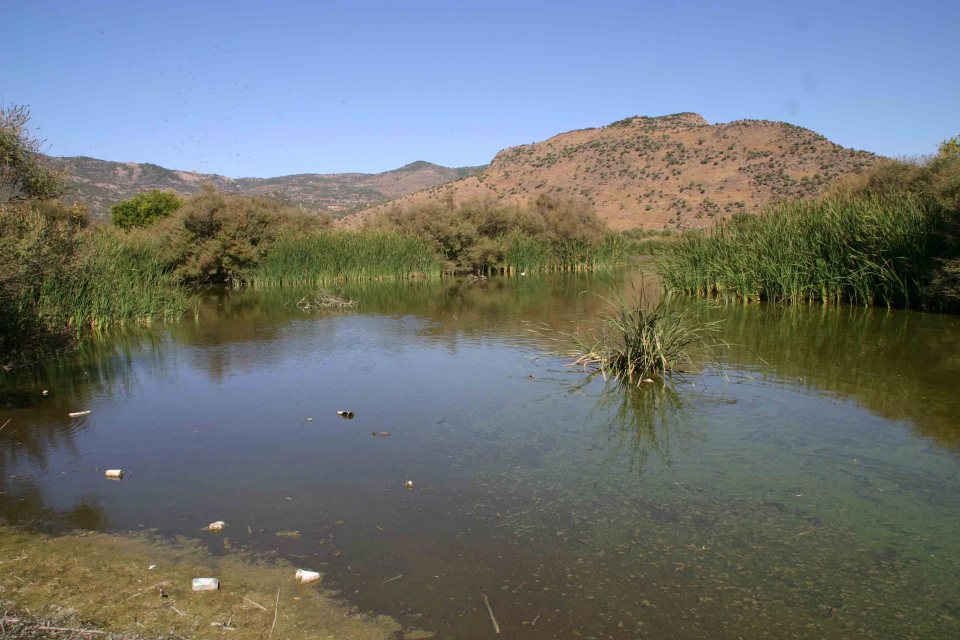 The Inland lake, popular with bird watchers, and on this occasion a young Englishman searching for snakes

View of Kalloni village from the Potamia valley

After arriving at my hotel in the late afternoon I immediately set out to rent a mountain bike. After renting a bike I explored some of the surrounding cultivated land where I was surprised by the lack of lizard activity. The first animal I found was a sub adult Caspian whip snake (Dolichophis caspius) as it was crossing a track in front of me. I jumped from the bike and caught the very active snake and got bitten several times in the process. After the snakes release I found a couple of Snake-eyed lacertids (Ophisops elegans) running from plant to plant and then around dusk I saw a Balkan green lizard (Lacerta trilineata) basking on a path edge. After my evening meal I went for a short nocturnal walk, after finding numerous Turkish geckos (Hemidactylus turcicus) I found a Common tree frog (Hyla arborea). 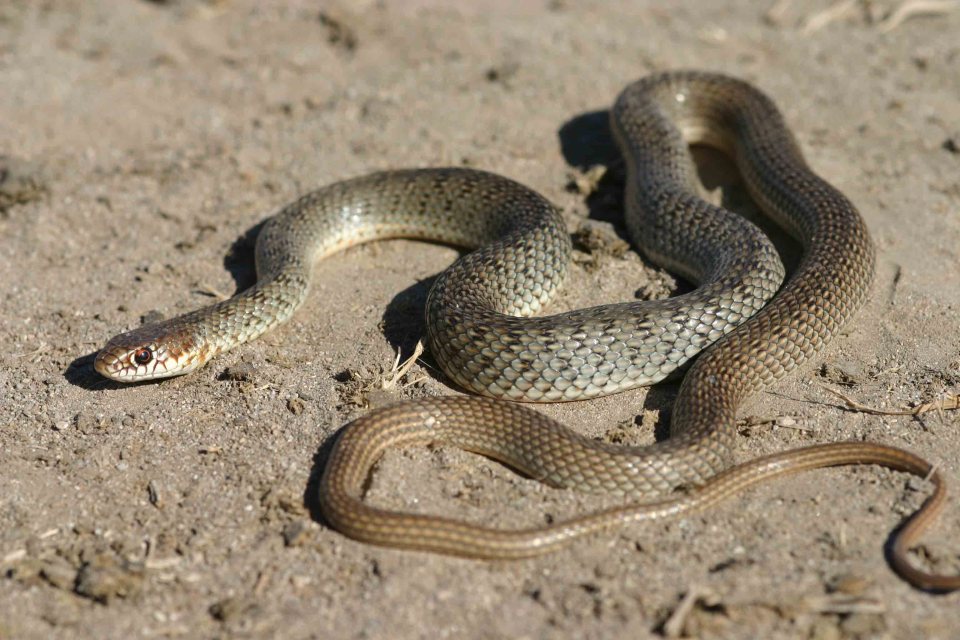 On this day I decided to visit the famous birdwatchers Inland lake which is located in the Potamia valley. After cycling along dirt tracks passing through cultivated land, and finding a DOR Green toad (Bufo viridis) I reached the freshwater lake. Here I saw hundreds of Levant water frogs (Pelophylax bedriague) and Balkan terrapins (Mauremys rivulata), and much to my surprise, only the odd Snake-eyed lacertid (Ophisops elegans). After admiring the turtles I went on a long bike ride north with no real herping done that afternoon.  I also visited the Potamia river, hinted to me as a good spot, however it was completely dry and I could not find any new species here. In the evening I spotted a Balkan green lizard (Lacerta trilineata) near my apartment then after dark found some more Tree frogs on around my balcony. Herp activity in general was frustratingly low, and I knew I would have to work hard if I was going to find anything!

River system next to the Inland lake

This day was spent again in the Potamia valley, where like the previous day very few lizards were observed and the trip was really suffering due to this dry after summer period without any rain. I re- visited the Inland lake but this time I was able to find both Dice snake (Natrix tessellata) and Grass snake (Natrix natrix persa) as well as water frogs and terrapins and some brief daytime calls from Tree frogs. After exploring some cultivated land with Agamas and lacertids I had to put to death a hatching Caspian whip snake (Dolichophis caspius) on the main road leading into Skala Kallonis. 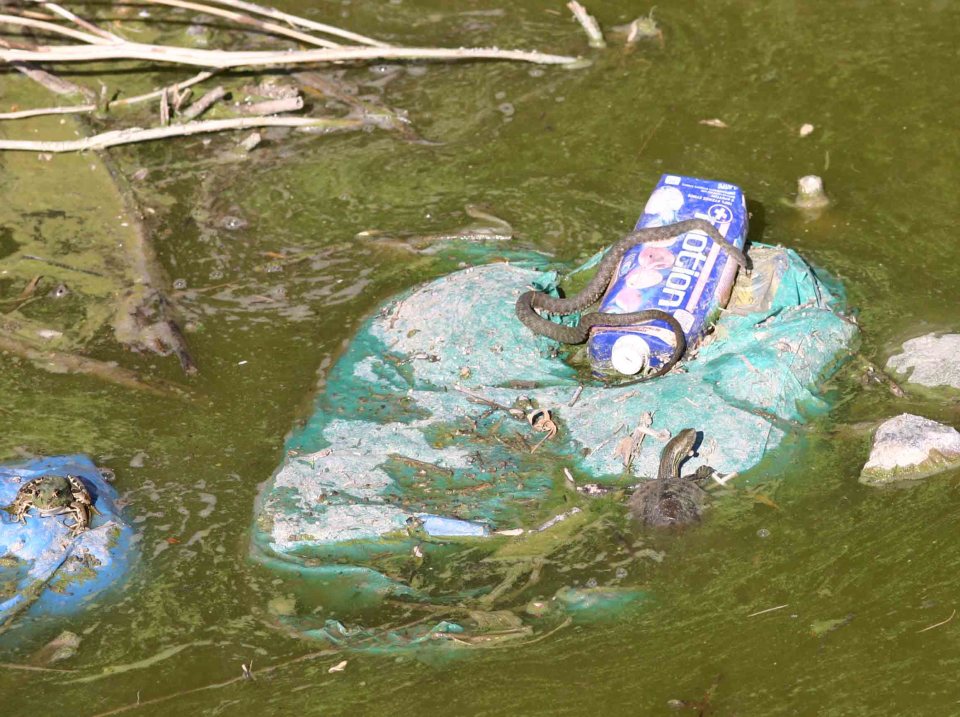 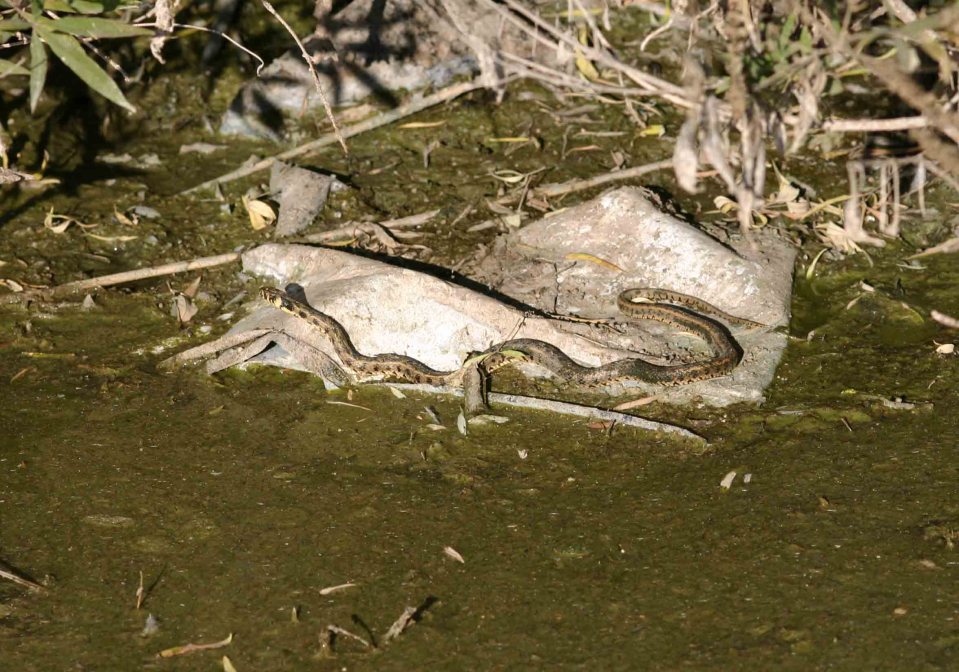 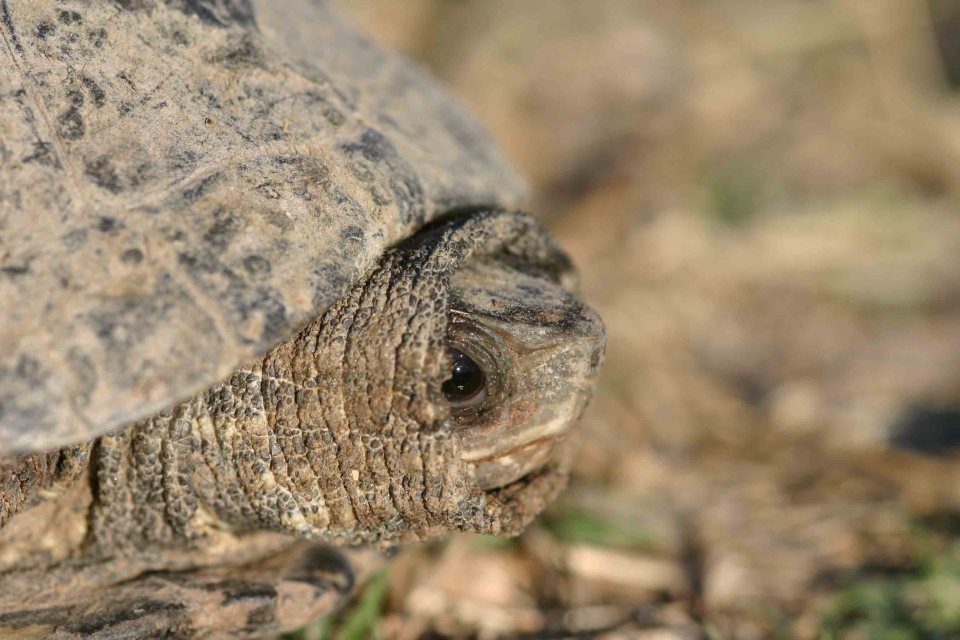 The young Caspian whip snake (Dolichophis caspius) I had to euthanise

A hot day that after the poor number of species seen so far I decided to dedicate to cycling. So I ventured to the dry hillsides surrounding the town of Parakila where the coastal road offered excellent biking. After a stop and lifing every stone in the area at a known spot for Dwarf snake (Eirenis modestus) I left empty handed with only a couple of lizards found. On the cycle back to Skala Kallonis I found a killed Scheltopusik (Pseudopus apodus) next to a vineyard.

This is the day I had been waiting for as the weather forecast predicted thunderstorms and my only chance to find Spadefoot toads (Pelobates syriacus).  The storm came early and lasted almost the entire day with vast downpoors and extremely strong winds, this meant I spent the day inside the hotel waiting for nightfall. Just before dark there was a power cut across the entire island which meant going out at night on a mountain bike with a torch looking for amphibians was going to be dangerous. But I could not waste the opportunity and as soon as darkness fell I set off out. Immediately I found several adult Green toads (Bufo viridis) hunting on the wet road surface and after about an hour I had found 20 toads and two tree frogs on the roads. I ventured to a known spot for Spadefoots in the Potamia valley with strong winds making cycling and holding a big torch very difficult. Here I found more Green toads hopping around the dirt tracks, I did not have my camera with me as the conditions were too bad to be attempting photography, so instead I kept some of the toads I rescued from the roads overnight for a photo session the next morning. As I was about to head back to the hotel I found another toad that had just been hit with a car, much to my fury it was an Eastern spadefoot toad (Pelobates syriacus), I could not believe how unlucky I had been.  After midnight amphibian activity stopped completely and I did not find any more toads…. 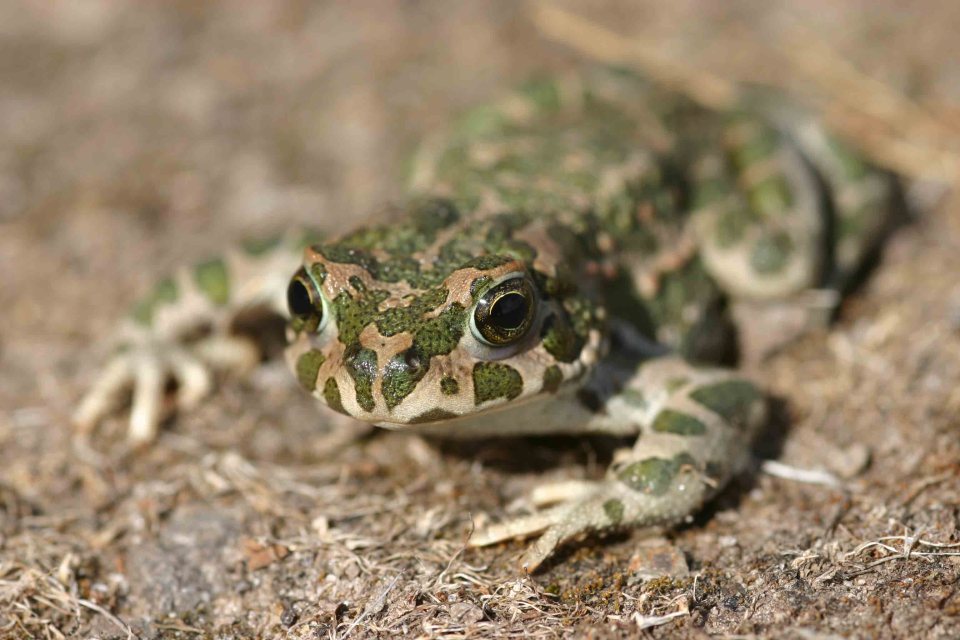 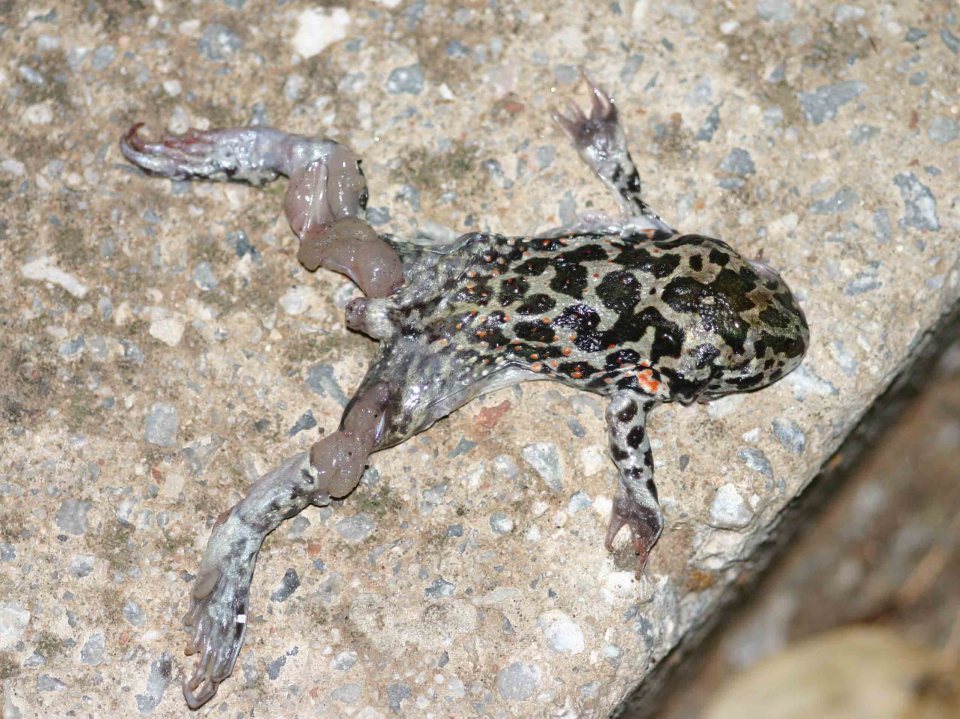 My only Eastern Spadefoot toad (Pelobates syriacus), just killed before I could get there

Although I was tired after the previous night the temperature had dropped from 29C to around 20C! So I set off out on the bike and immediately starting seeing more lizards on the move, as well as many DOR Green toads from the previous night. After seeing a couple of Green lizards basking on the edge of some dirt tracks I decided to explore a rocky hillside above the Potamia valley. This area looked good to me for vipers, and my instinct proved correct as I found a fresh slough of a medium sized Ottoman viper (Montivipera xanthina) of around 70cm. It looked to me as if the skin had been cast that morning after the storm so I lifted every rock in the vicinity as it was now overcast again. Later in the afternoon after exploring more of this hillside the sun came back out and I found my only specimen of Spur-thighed tortoise (Testudo graeca) of this trip on the move. After lifting even more rocks with no luck I ventured back down to the dirt track in the Potamia valley to my bike. As I walked along I was not prepared with either a camera or a glove as I stumbled across a huge Ottoman viper (Montivipera xanthina) sunning itself on a pile of logs on the edge of the track. As the large viper saw me and started to retreat I got over excited and held the snake’s tail as it was trying to escape into the logs. I soon became aware of what I was doing without the protection of my glove or a snake hook and regretably released the snake so it could escape. I was very disappointed not to get pictures to show how large this viper really was, and I can certainly confirm that Ottoman vipers from these larger north Aegean islands are as big as stated. I would estimate this specimen was around 120cm in length. Sadly, the next morning it was time to leave Lesvos, just as the weather had changed and I was sure to find more species, it seems my trip was a week too early!

Farmer in the Potamia valley 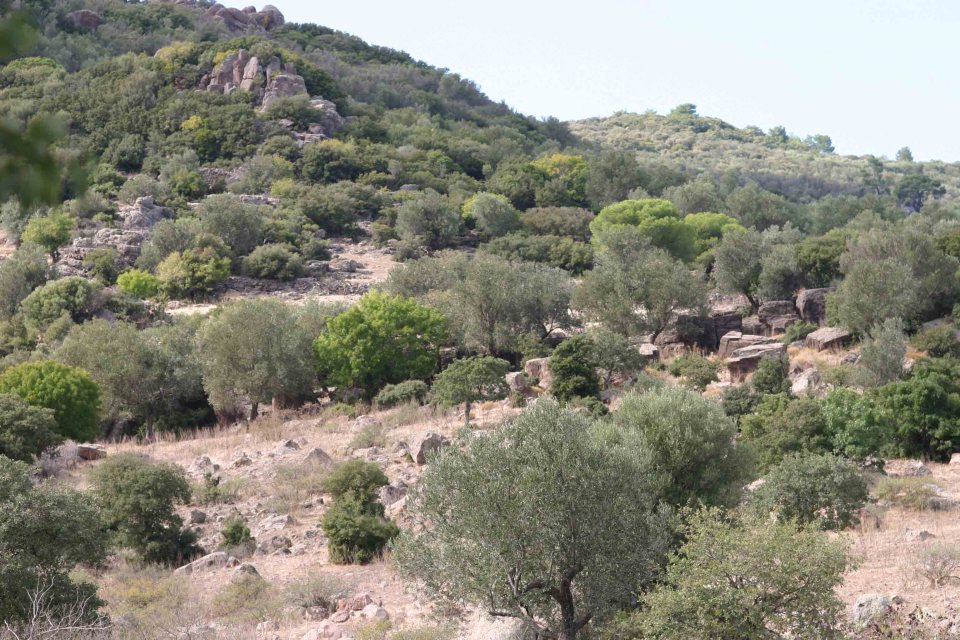 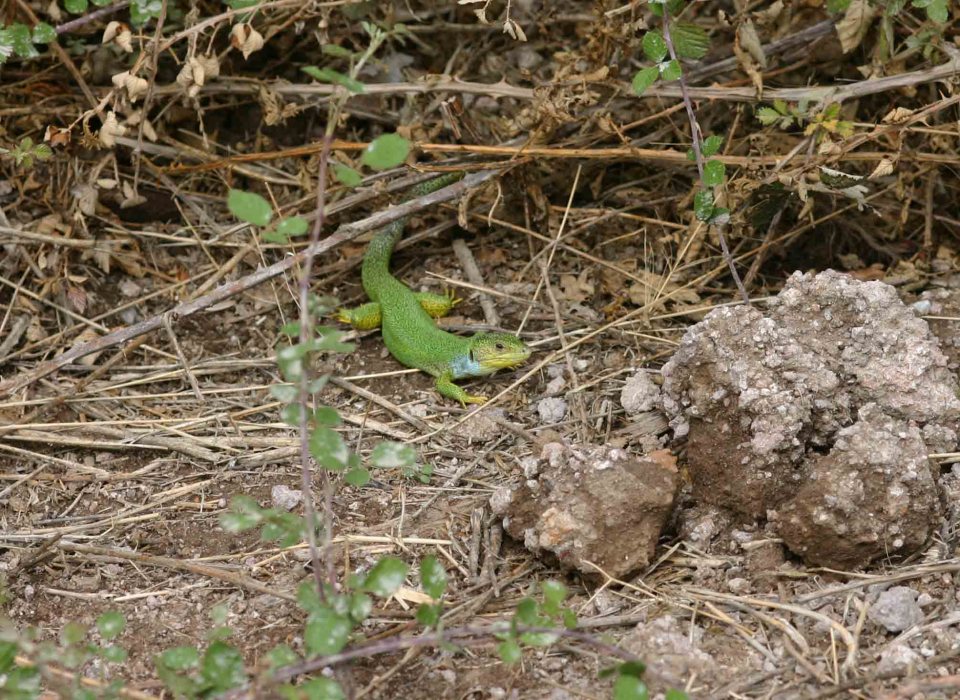 I was certainly very unlucky with regard to the timing of this trip, and the lack of rain and decrease in temperature that one would usually associate with October did not occur until the end of the week. In fact the last day proved far more successful in regard to the number of lizards seen such as Laudakia stellio and Lacerta trilineata which were both very scarce during the first five days, which was almost unbelieveable considering how easily they are seen in the springtime.  I was also unlucky with regard to finding the much desired Spadefoot toad, and despite five hours of searching on my own at night I could only find a single dead specimen, clearly they are not as abundant in the Autumn as the springtime, although the Green toads were still found in high numbers.

Lesvos is however a beautiful island and I have no doubt that when I return one day in the springtime I will far far greater numbers of reptiles and amphibians in comparision with the relatively poor number of species I was able to find on this trip.