Like in 2016, I visited Kat’s homeland of Slovakia at the end of May for a mostly family visit. However, the family weekend house is ideally situated in nice wooded mountains which provides an ideal base to explore the local Herpetofauna. Kat’s dad also allows me to use his other car so I can get around without problems. Most of the area in the Banska Bystrica region is covered by forest with some valleys used for agriculture and also harbours populations of large mammals such as wild boar, bear, lynx and wolf which are extinct in most parts of Europe.
The weather during the entire visit was extremely hot and dry for the time of the year, with temperatures most days reaching 30c with virtually never a cloud in the sky. This made things rather tricky for finding amphibians especially some specific target species I hoped to find. In the end after some dedication I was still able to find nearly all the species I wanted to see by getting up early and exploring before it became too hot as well as a few nocturnal amphibian searches. It was great to finally meet with Slovak field herper Salmo Trutta (Ondrej) after corresponding for a few years as well as Peter Nociar who met us one evening while we searched for spadefoot toads.
Amphibians
My main target species for this trip were amphibians, well that was the plan at least. However, I wasn’t counting on Mediterranean type temperatures and no rain at all. With very low expectations I did my first night search at a wooded mountain brook shown to me by Kats dad which normally has nice numbers of fire salamamders (Salamandra salamandra). Despite everywhere being very dry on the forest floor I found one adult salamander and a good number of common frogs (Rana temporaria). Every morning I would find big, squashed common toads (Bufo bufo) on the roads, here much larger than the UK as well as a few Green toads (Bufo viridis) which seem to prefer living in town centres whereas the common toads were mainly seen on country roads. My number one target however was the common spadefoot toad (Pelobates fuscus) which I had never found before. They don’t seem to occur in the area around the weekend house as it is too mountainous but I knew of a place with a nice population in the south of Slovakia. Fortunately, Peter Nociar who knows the area informed me of a very brief rain shower over the wetland one evening, so we jumped in the car and drove one hour to the spot. It didn’t look promising as everywhere was bone dry again by nightfall but after walking around a while I spotted a spadefoot toad sitting at the side of the path. A very lucky find in such conditions! Back in town a number of green toads were out and about as they seem to be active no matter what. While swimming at a mountain lake one day I came across some agile frogs (Rana dalmatina) and heard tree frogs (Hyla arborea) at a couple of places but was too lazy to go and find them. Oddly enough I didn’t see any newt or fire-bellied toad species this time despite them being found all around the places I visited. The endemic carpathian newt should occur around most of the areas too but I didn’t do any specific searches and this is something I will focus on more next time. 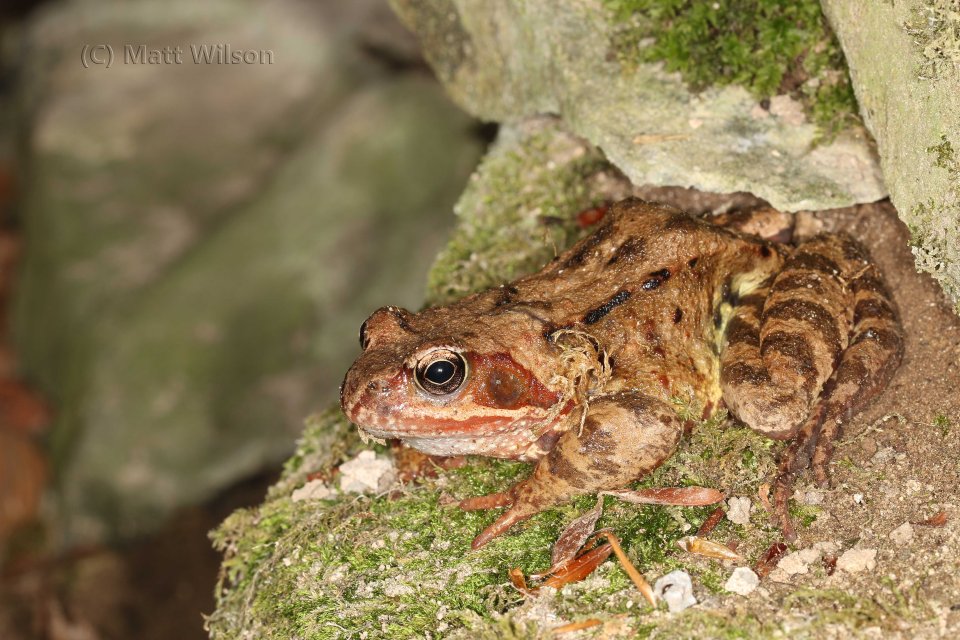 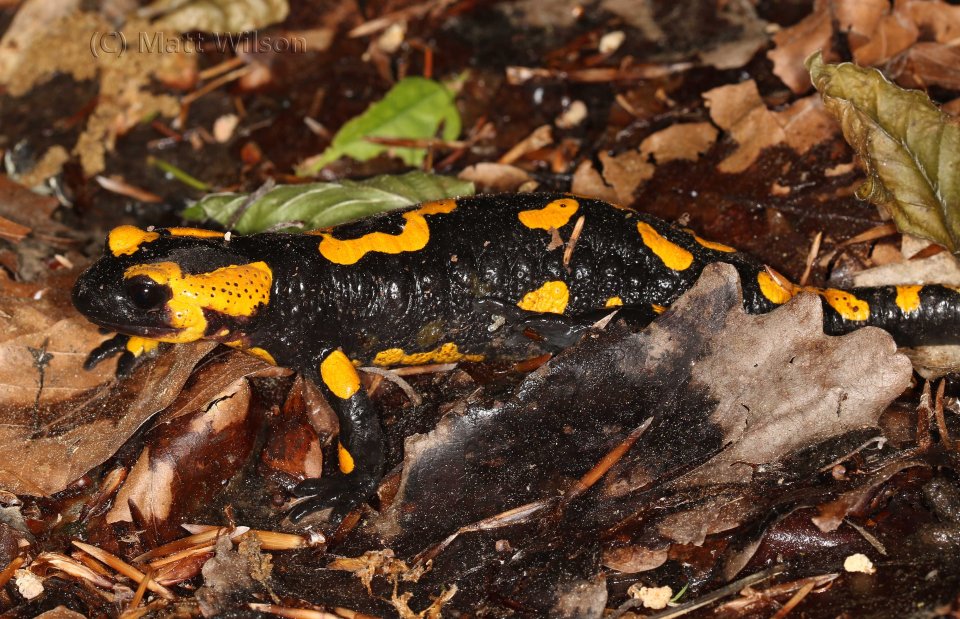 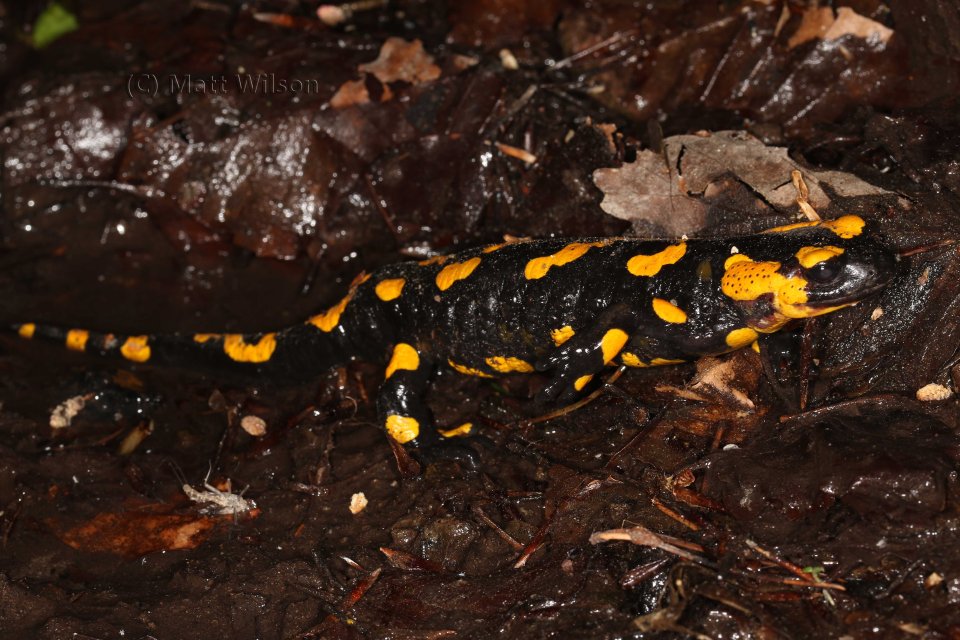 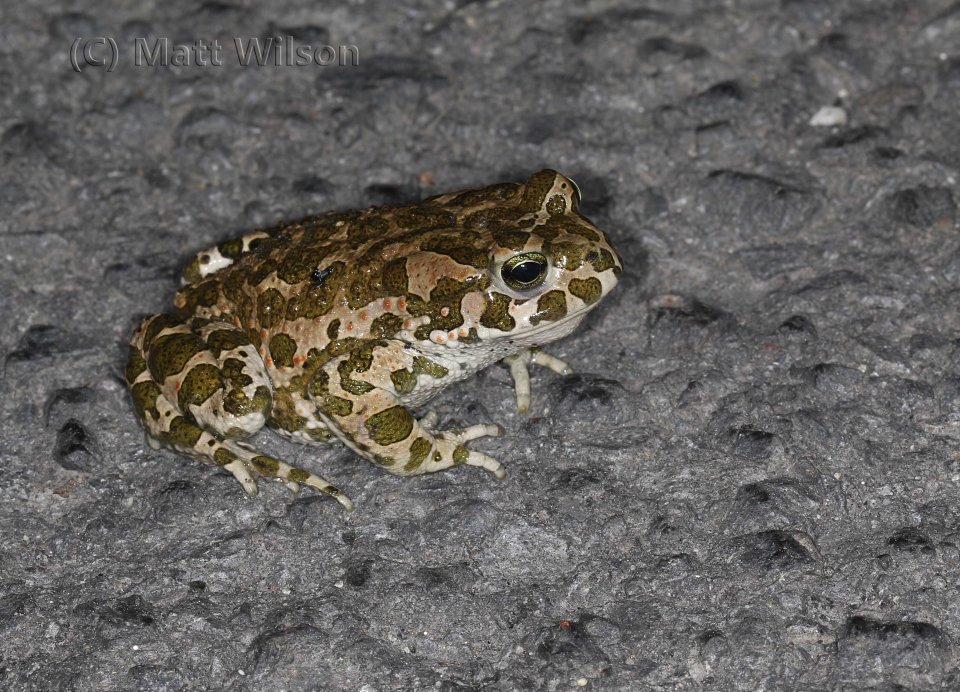 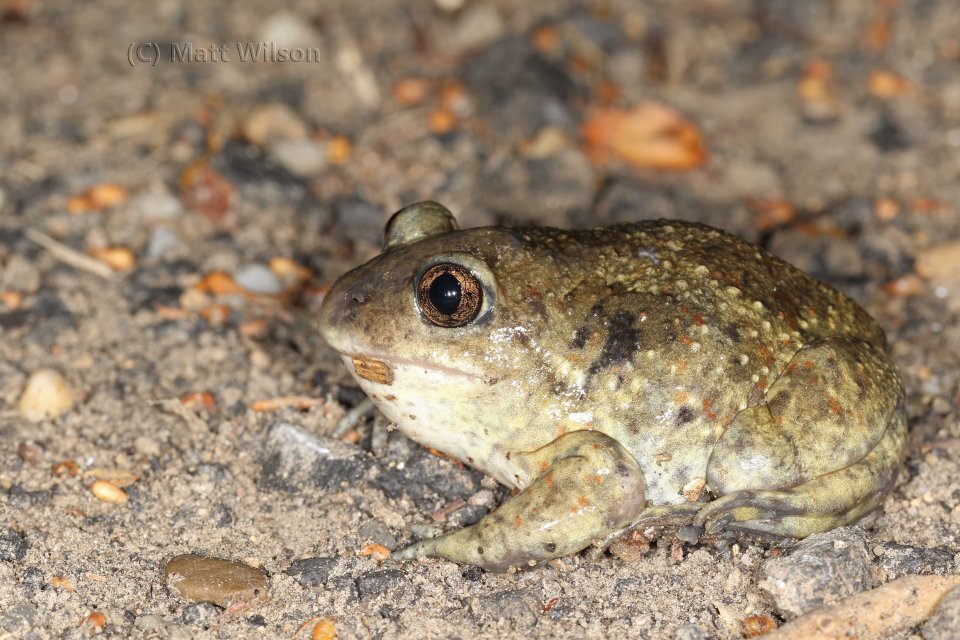 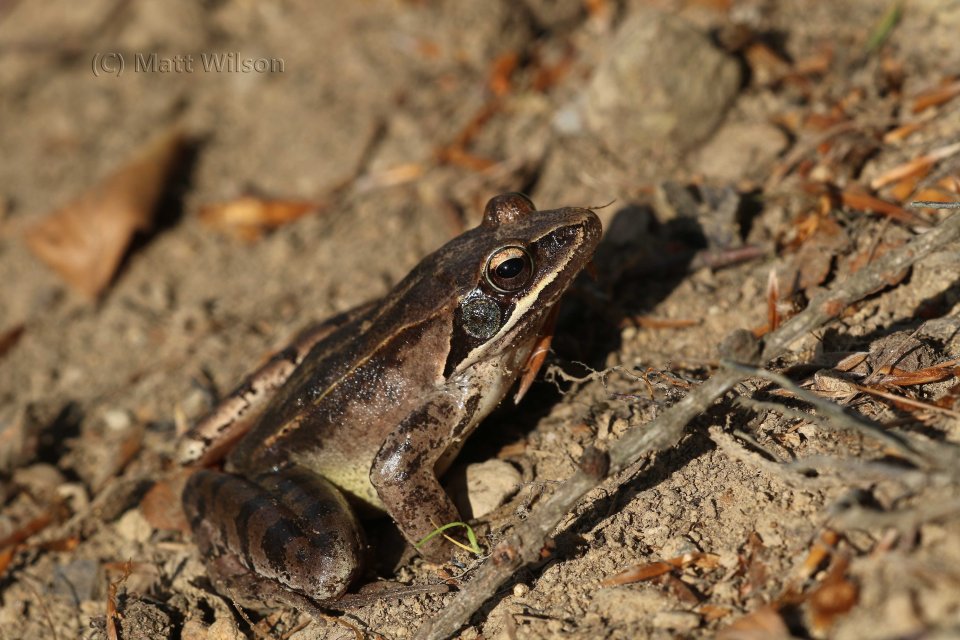 Lizards
The hot, dry weather wasn’t impacting on lizard activity and indeed I saw more than the previous year. At one nice roadside edge I explored most mornings I saw good numbers of Green lizards (Lacerta viridis), sand lizard (Lacerta agilis) and common wall lizard (Podarcis muralis). The big male green lizards were always very wary and I only managed photos of juveniles and females this trip. At higher elevations Common lizard (Zootoca vivipara) were also seen, usually with sand lizards. Slow worms (Anguis fragilis) were found a couple of times with one huge blue-spotted male being found in the garden under a piece of tin which usually harbours a snake or two (although none while I was there!). 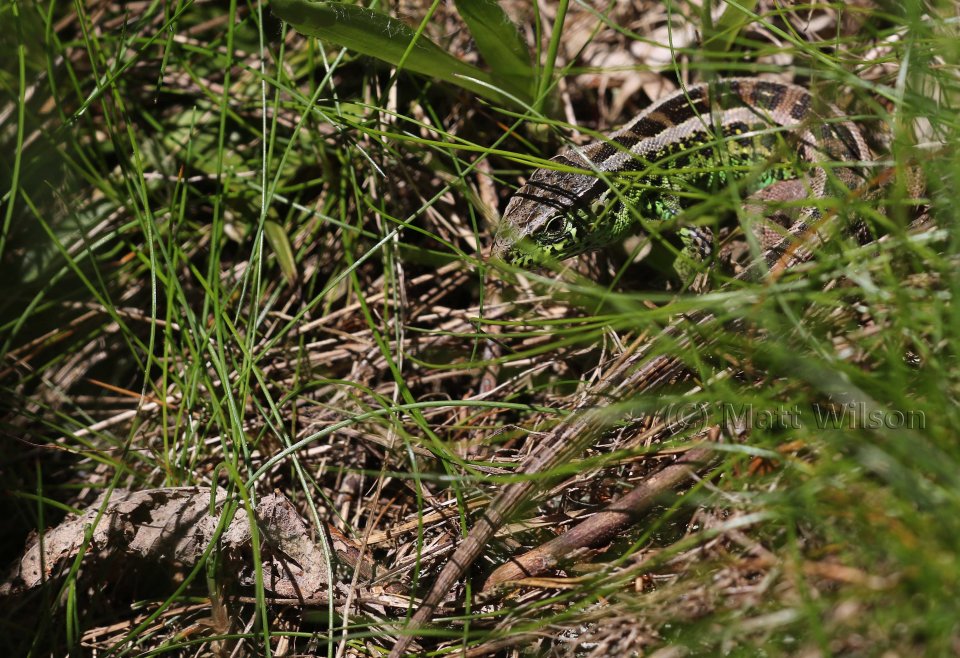 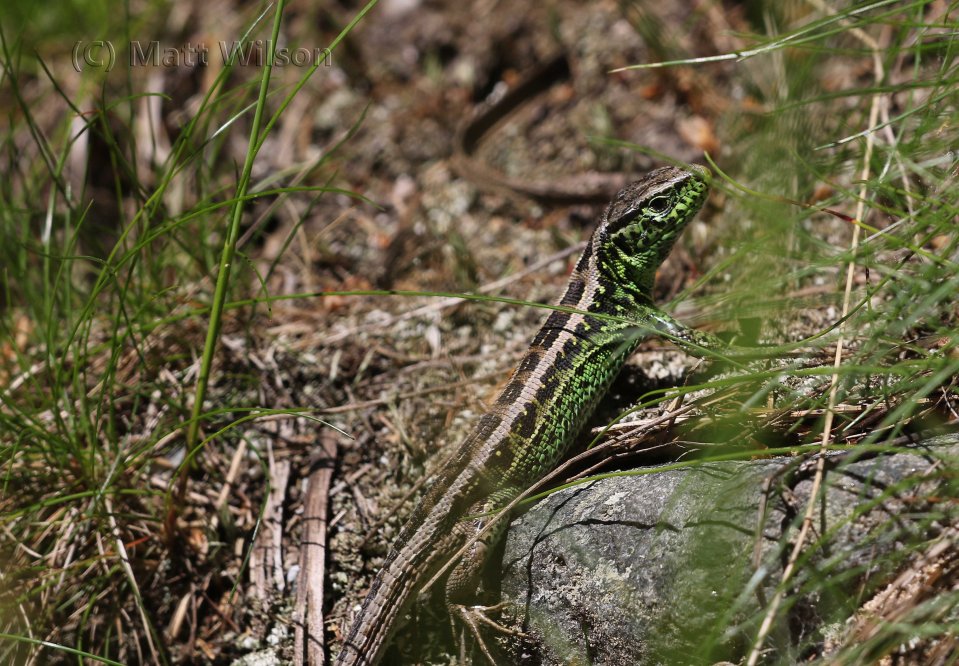 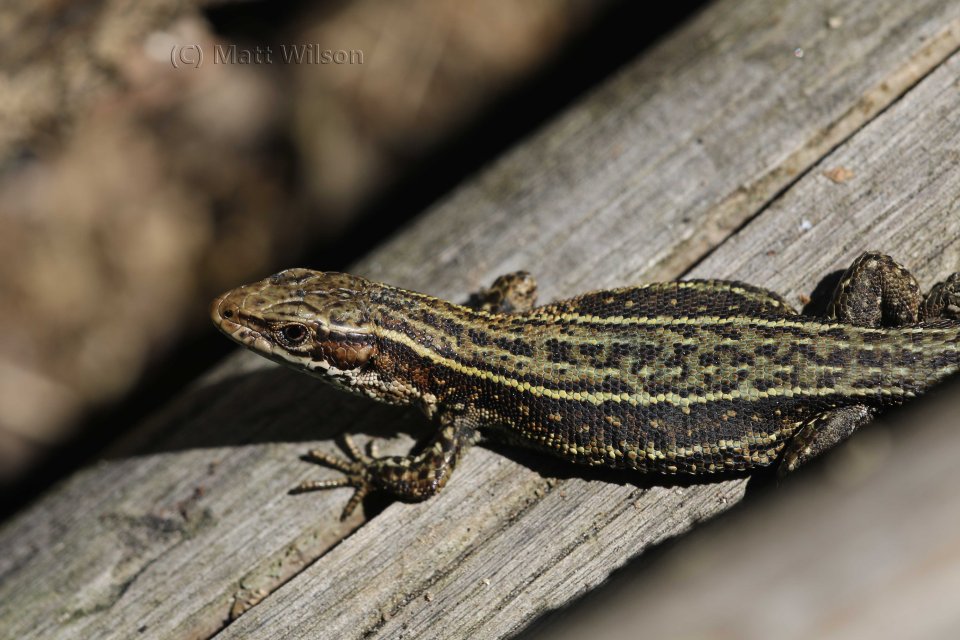 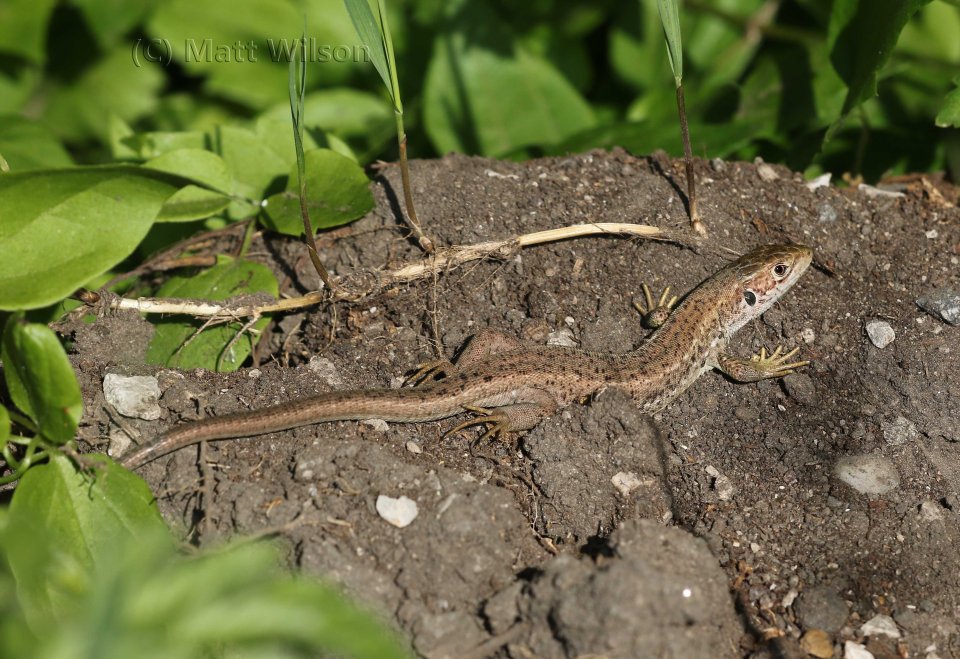 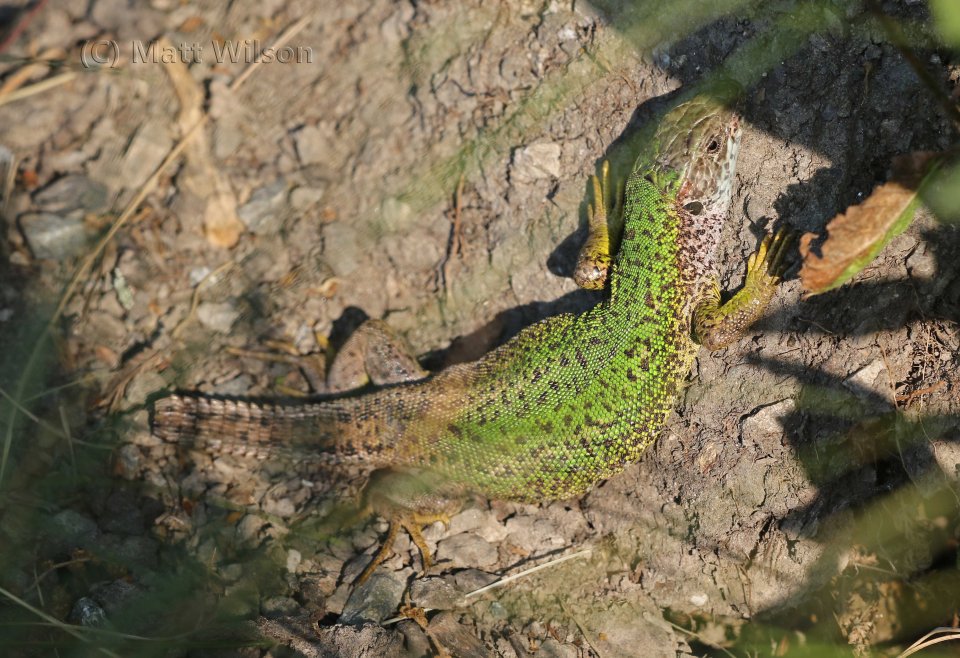 Snakes
Like the previous visit, large numbers of dice snakes (Natrix tessellata) and Grass snake (Natrix natrix) were seen around pretty much any water source we came across even at a lake were we went swimming several times despite the banks being cut to discourage them. Quite a few were also seen killed on roads all around the weekend house. Whilst out with Ondrej in north Slovakia one day, he caught a huge female grass snake which I photographed and we saw several other large ones without catching (the smell…). One morning I also found an adult Aesculapian snake (Zamenis longissimus) on a roadside embankment and then I found a dead one a little further down. I thought I would find more but in the end I only saw one that I could definitely identify but a few snakes seen disappearing in long grass could have been this species too. Two other snakes I have seen many times before but not in Slovakia were high on my wish list this time. While looking for bears I visited a spot hinted to me by Ondrej for Adder (Vipera berus). It was 4pm and very hot when I searched the spot so I didn’t expect to find anything but one male adder was thankfully braving the hot weather. On a different day, together with Ondrej this time we found another male but generally conditions were too hot to see adders on this trip and like those in the U.K they remain hidden in full sunshine and warm to hot temperatures. Furthermore, I was able to find the other snake I had not seen in Slovakia before: smooth snake (Coronella austriaca). It seems they occur everywhere in most habitats but as usual they are hard to find without specific refugia to lift. I found one large adult at a hotspot hinted to me by Ondrej and then another basking in a hedge not far from the weekend house early one morning. The first snake was moulting and a bit ugly but thankfully the second one I found was a real beauty! 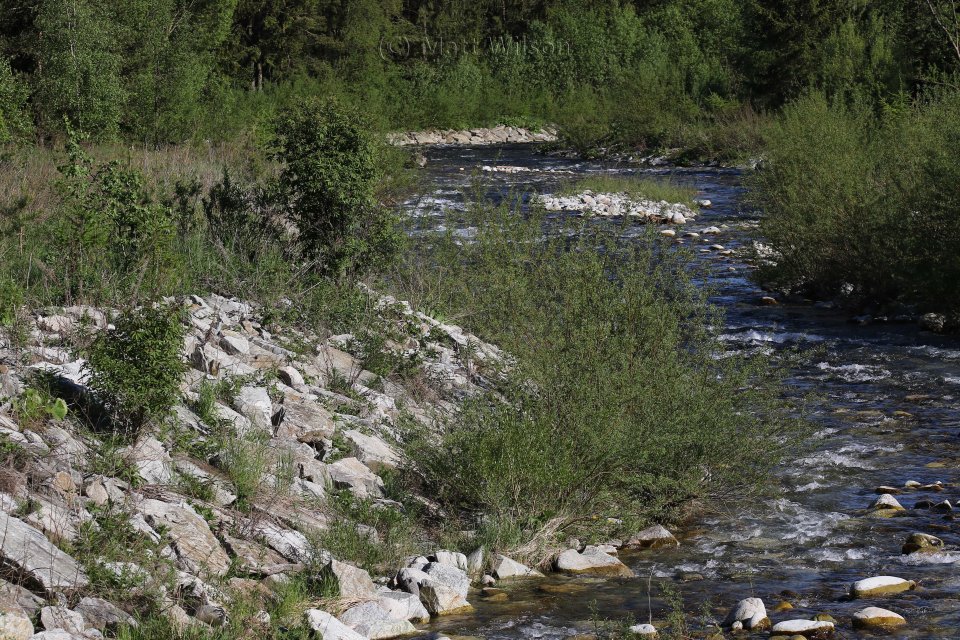 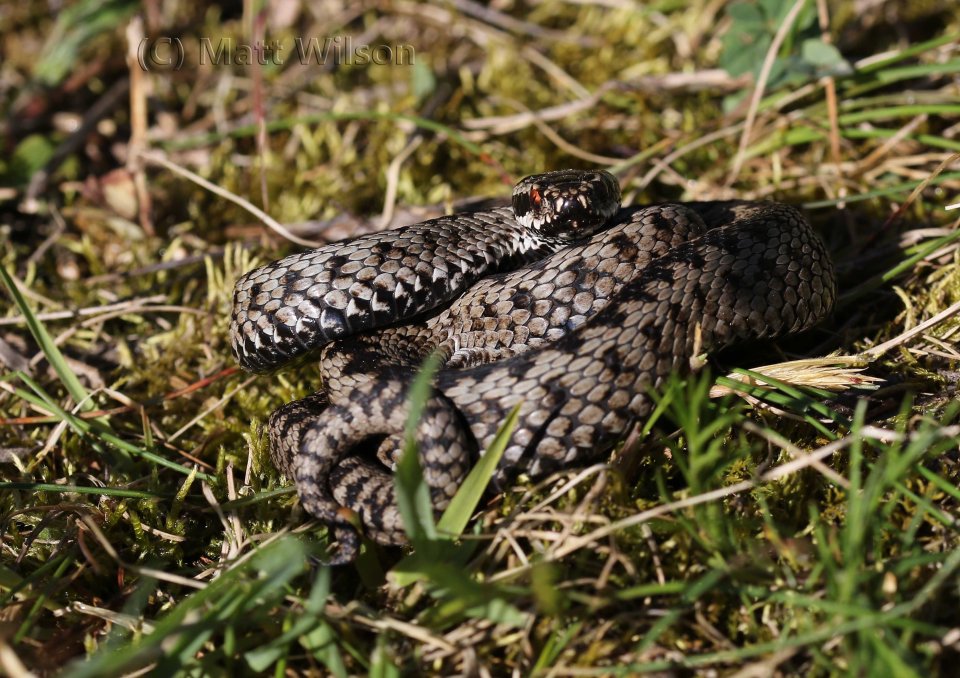 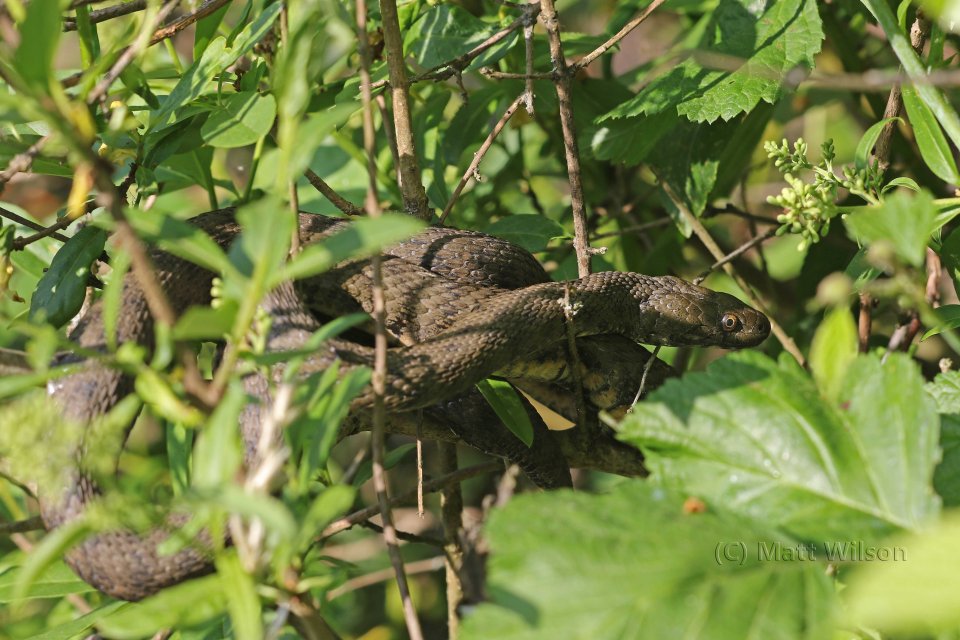 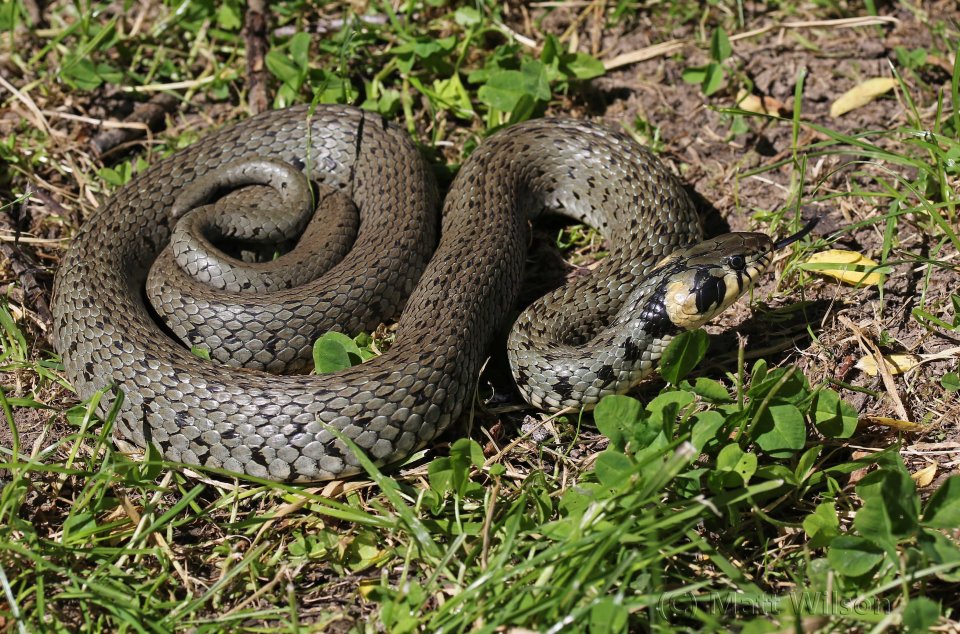